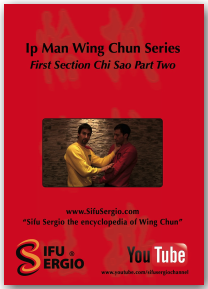 Hundreds of years ago, the ancient monks of the Shaolin temple realized that a normal optical reflex was not enough to stop serious incoming attacks at full speed. It simply takes too long. Think how much time it costs to identify an attack on a visual basis. The signal has to be sent by the brain to the limbs for you to react and that simply takes too much time.

Recent studies show it's impossible for a person to block punches or to stop an attack at full speed based just purely on a visual basis. It's the same reason a goalkeeper cannot stop a penalty in a soccer match unless he jumps beforehand in the right corner: it's just too fast. The Shaolin monks therefore developed a special reflex training program called 'Chi Sao', freely translated as 'sticking hands'. This is a specialized reflex training program that let's you react in a much faster way and is the only way to stop one hundred percent of incoming attacks each and every time. Your opponent will be stunned, asking himself just why he is not able to land a single telling blow. Believe me, I have seen and felt it in action.

So how does it work?

It's very simple. Imagine I am standing behind you and all of a sudden I thrust a needle into your leg. What will you do? Stay still and think about what you are going to say? Or will you just react and spring up and shout whatever you feel like? You get my point? You don't have to think about it, it just happens.

That's a REAL reflex based on sense of touch. You cannot be fooled by the eyes. Let David Copperfield take care of that. The signal goes directly into the spinal cord and then your body will react. After implementing the reflexes from the Chi Sao program you will react exactly like you should. You will complement your opponent's action, not work against it. You will stick to him like superglue, absorbing and deflecting the incoming attacks without effort. Your sense of touch cannot be fooled, that's why the monks of the Shaolin temple called it a system, not a method.

A system works every single time. A method might not.

Because endless combinations are possible if we use all the techniques of the Wing Tjun system, the Grandmasters in the past developed fixed sequences in order to make sure that the whole system was passed on to the next generation. It's simply amazing! Like installing a new Windows XP or Vista operating system on to your personal hard drive, all of the movements from the forms are put reflex by reflex at a time into your nervous system. Sounds like the future doesn't it? Star Trek? The Matrix? No. The monks of the Shaolin temple were way ahead of their time. Now for the best part for you, because it is about YOU having access to the best way of learning this specialized Kung Fu skill.

Sifu Sergio Iadarola is one of the most knowledgeable masters I know in this field, having studied directly under the best Grandmasters in Hong Kong and China for years. I know of no better person to teach you these skills, because he is also the greatest teacher I know in this field, and that is far more important for YOU. Just let the facts speak for themselves; this man has the single most successful Kung Fu school in the Netherlands, with well over 400 students and at the same time he runs an association with well over 6000 members.

He will teach you all the movements, concepts and principles of the 1st section of Chi Sao, step-by-step in the most detailed way. It's like getting private lessons from the man himself, and this man currently charges 800 euro an hour for private lessons! Why? Because hundreds of people - and I literally mean hundreds - want to take private lessons from him, and now you can! You will save yourself the time and the cost of flying to China, finding a Grandmaster willing to teach you all these secrets through years and years of training and building up a relationship with your teacher in order for him to show you these once-secret concepts.

So here's the deal. These incredible DVDs are now available at half-price, for the first 500 buyers only. You can get these secrets for the ridiculously low price of part 1 or part 2 for $150. If you order both, the price is even lower: $250. But only if you place your order now and make sure you get it while the getting is good.

P.S. The Chi Sao Secrets Parts 1 and 2 will teach you all the inside secrets of this ancient Kung Fu exercise. Get your hands on this DVD now. You'll never regret having this knowledge always ready to use, when the time arises. And I'm betting that someday that time will arise.

...What I heard about your capabilities is true: you have probably the best Wing Tjun (Wing Chun) technique and ability in the world, and you are so young... I'm without words. I'm really waiting your next DVD's, and I'm going to train what you explain in your first 2 DVDs." Davide Morciano, Italy

Minute after minute of pure quality, this is what the Ving Tsun world needs, clear explanations instead of DVDs showing off the ego of the one performing." Jean Filips, France

It's, rare to find a DVD about Wing Tjun with this quality. The information, especially the concepts are something I have never heard or seen before, and it helped me tremendously in my own training. Keep up the good work! Thanks." Frank Delgado, United States

I've watched Your DVDs many many times. They are more than I can put into words!! Thank you. I'll hope you are going to do more DVDs about the 18 bridging concepts and the Chi Sao sections. Thank you for the time that you put into your DVDs. Sorry for my bad English." Pascal Virchaux, France

"I have ordered all your DVDs to date and they are incredible. After training for 9 years I thought I knew quite a lot about the Wing Tjun system, but what I have learnt in the past few weeks has really opened my eyes. You hold nothing back! Look forward to learning more from you in the future." Richard, South Africa

"Being a WT student for the past five years and constantly surfing the net for more information I can finally say my prayers have been answered. Sifu Sergio's DVD's are the most informative lessons I have ever received during my training and his knowledge of other fighting styles makes for interesting watching. Can't wait to see what comes next!!" Darryl Alexander, South Africa

Let me begin by thanking you for all your time and effort you put into something we are all so passionate about. Since ordering your DVDs, I can honestly say it has taken my training, understanding and knowledge to the next level. I understand more now in 2 months since receiving your DVDs than I did in 9 years of training. Student for life." Shaun, South Africa

"I've been reading the comments you've posted on your site, about your DVDs, and now I want to make my comments. I found out about the IWKA on the internet, and that was the way I became the chief instructor of IWKA Brazil. You were the guy who changed my life, who changed my point of view. I was always searching on the net, and be sure I keep searching for new Wing Tjun videos, and other martial art styles, the one who keeps shocking me however is you. And I'm not telling these things because you are my Sifu, I'm telling this because nobody teaches like you, with all those details, and with your humble of human being. All those guys who teach martial arts, and I mean every martial arts, are so arrogant. A lot of them don't even respect their students, so what can I say about respecting other martial art teachers? I think that's the reason you are so successful, and you deserve it. You are a great teacher, you are a great man and that's why you are so respected all over the world. You treat Wing Tjun as a way of life, not only like a martial art, like Bruce Lee said. Your knowledge has no price, thanks for sharing it with me and also with all your students." TODAI Sihing Erik Alvarenga IWKA, Brasil 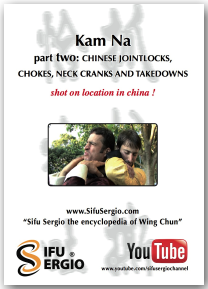 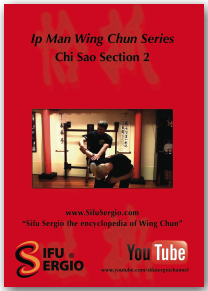 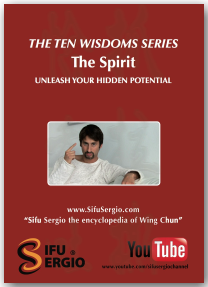 The 10 Wisdoms Series: The Spirit